Just in case you've ended up here because you are interested in my son that went to Changing Hands Bookstore and had one of Ree's cookbooks signed for me, let me tell you a little about him and share some pics. 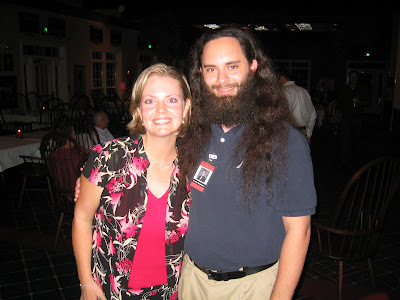 I am the blessed Mom of two sons. Neither of them have married to date. One is probably close, or should I say closer than the other. He lives in Alabama where I am. The other son, Jeremy (pictured above), lives in Arizona. This picture was taken at his 10 year high school reunion. He really shocked his classmates with his hair! He has shaved his beard right now but still has long hair. So if you're not in to that, then you might need to keep looking! LOL 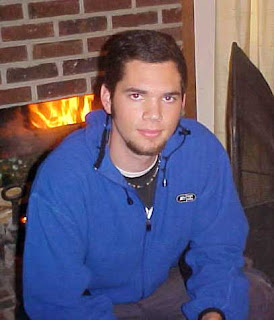 My other son, Ben, (to the right) is in a serious relationship and has been for a couple of years. I told him this afternoon he should go ahead and marry her and quit waiting for life to be "perfect". It wasn't going to happen! It never is, is it? She is a sweet girl and loves him very much.
This is the picture of him that "Mom" likes best, clean cut! I took it several years ago at my parents' home one Christmas. My, how times flies when you're not looking! Now, Ben has grown his hair out. And it is out there! He needs gel or something to tame it. His girlfriend and I both like him better with short hair but I guess that was our mistake for telling him that. What is it with men? Surely they're not all like this, are they? You don't have to answer that... I would have to go back to Jeremy's high school pictures to find one of him with short hair. Well, actually that's not true. He was in the Navy for 4 years after high school. Come to think of it, I think that's why he has long hair. Never did like rules--always liked to put his foot across the line--wonder where he gets that from??? Here he is with his grandparents. His "Pa" is 83 and his "Nan" is 79. They can't get enough of him when he makes it home for a visit! This is a picture I took of Jeremy while we were sitting at the table again at the grandparents' place. He promptly asked me to please put away the camera so he could eat in peace. I guess when they're 33 and ask you that, you should respect them as the adults that they are. So I did. And he ate. In peace. And then you have the one of him pretending he is going to push me into the pond, knowing full well the catfish would eat me alive! My dad has some pretty big fish in there. It's scary when they come up to eat the floating food he feeds them. I mean, they're mouths are huge!

At any rate, he is a computer programmer, has a very good job but doesn't go to clubs often (Starbucks wouldn't fall into that category) and he enjoys reading and gaming some on the computer. And I figured, what the heck! I bet Ree could help me find him a woman, even if she doesn't know that's what she's doing (sorry Pioneer Woman), I'm getting desperate for daughter-in-laws and grandchildren. I'm not getting any younger here, you know! LOL

So, if per chance you are interested, just leave me a comment. Maybe Cupid is shooting some arrows this month! Maybe the stars are aligned! Maybe Christmas is coming early! We'll see...

Take care and hope you all have a Happy Thanksgiving! We have so much to be thankful for...and God bless!
Posted by Mott at 10:05 PM

Email ThisBlogThis!Share to TwitterShare to FacebookShare to Pinterest
Labels: sons

We regret to inform you that comments were turned off for this post. Sorry 'bout that!