The night built with much anticipation. Our father was to be recognized for 50+ years in the ministry, along with my uncle. The night went by without a hitch! Dad and my uncle were both honored for their 100+ years combined. Unfortunately, my mom and my aunt, who have stood by their sides quietly for all these years were not recognized. I must say that my father's ministry would not have been what it was had it not been for her and I am sure the same is true for my uncle. After all the nervousness, it was over in less than 5 minutes.

I am disappointed and saddened that the district council representative asked my father and my uncle to sum up in 1 word what they had learned through the years. How do you describe in 1 word all those years of service? What word do you choose? My uncle said perseverance. My dad must not have understood (or ignored???) what was said because he went over the limit with his words!

Also, a young man that my father has mentored over the years was ordained into the ministry. He is pastoring the first church that my dad started over 50 years ago. Several young men were ordained and we were proud to be there.


I have a tendency to get a little carried away or maybe just too prepared???. However, I brought 2 cameras and my video camera. My youngest son had my point and shoot camera, hubby was armed with my Nikon D60 (fairly new) and I had the video camera. You would think we would have gotten one good picture. But, sad to say, we didn't. The ones my son took were too far away and blurry, 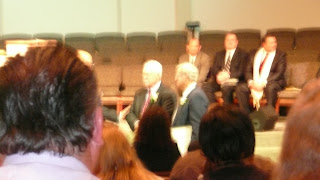 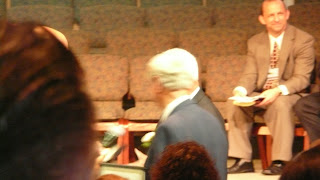 the ones my hubby took, well...he expected to see the images in the little screen on back of camera (not there), so he just aimed in their direction and snapped a couple of shots

and I was filming away with the camcorder and when the presentation was finished, I pressed the button to stop taping and turned the camera ON!!! So the night was something we will have to carry in our internal hard drives because those are the only decent pictures I got!

Email ThisBlogThis!Share to TwitterShare to FacebookShare to Pinterest
Labels: Dad